About 200 people have been rescued by the emergency services from the town of Cockermouth, as floods hit Cumbria.

The festival takes place from November 19-22 and is the largest and most varied event of its type in Europe, with more than 6,000 visitors each year.

Congrats to Sarah Whittington on winning our competition. http://www.lakedistricttouristguide.com

Ashness Bridge (Off the B5289)
Looking North across Derwentwater to the towering peaks of Skiddaw provides a breathtaking view.
Ashness Bridge is an excellent example of a packhorse bridge. 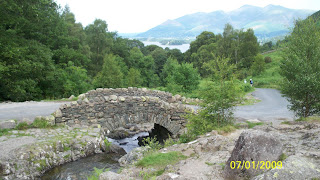 One day left to enter the competition

For a chance to win 2 nights stay in the Lake District all you need to do is become a fan of our facebook page and follow us on Twitter.


http://www.lakedistricttouristguide.com/Articles/Win-2-nights-stay-in-the--Lake-District_61.asp
Posted by Sajid Iqbal at 10:19 No comments:

This new event is held during October half term - a 7 day food and drink extravaganza showcasing the very best in local produce and exceptional dining experiences that can be found in and around Kendal. This area is home to some of the finest food and drink in Cumbria. From local fish, game, beef and lamb, to the sumptuous fruit, vegetables and cheeses, the Kendal Festival of Food offers you the very best.
Posted by Sajid Iqbal at 06:30 No comments:

ALFRED Wainwright fans are being given a chance to follow the great man’s spoken words as well as his footsteps with a new collection of audio guides.
The actor Nik Wood-Jones, who recreated AW’s craggy voice for the BBC’s popular Wainwright’s Walks series, has narrated directions for eight walks which people can take with them on to the fells.
The project follows the popularity of an audio walk to Helm Crag, Grasmere, which was produced by Cumbria Tourism and downloaded by over 5,000 people.

Cumbria Tourism linked up with Wainwright book publishers Frances Lincoln to produce a special book and a free CD featuring the audio walks, which can be listened to on iPods or MP3 players.
The new walks are to Orrest Head, Windermere; Place Fell, Ullswater; Latrigg, Keswick; Haystacks, Borrowdale; Nab Scar, Rydal; Coniston Old Man; and Catbells, Keswick. Each is split up into sections so walkers can pause and play the directions as they walk between landmarks.
Between 1952 and 1966, Alfred Wainwright combed 214 Lake District summits and wrote seven guide books – detailing and drawing the maps and routes by hand. They are still in print today.
Posted by Sajid Iqbal at 04:08 No comments:

THE boss of a major tourist attraction wants to triple its size in a £3.6 million expansion plan.
David Gill hopes to bring elephants and more “big cats” to South Lakes Wild Animal Park, at Dalton-in-Furness, which drew 250,000 visitors through its gates last year, as well as improving parking, and building extra educational facilities for children.
Posted by Sajid Iqbal at 04:07 1 comment:

Saturday September 26th to Sunday October 4th
Come and join us for over 9 days with more than 50 guided walks to suit everyone ranging from gentle scenic strolls to more experienced mountaineering around Englands most beautiful lake,
and all for FREE!!
Posted by Sajid Iqbal at 01:43 No comments:

Last Saturday of September
Posted by Sajid Iqbal at 02:43 No comments:

The Great North Swim has been hailed as a huge success by organisers who said up to 20,000 spectators visited Cumbria to watch the event.
A total of 6,000 participants braved a water temperature of 17C (63F) to take part in the one-mile open-water course at Lake Windermere.

Click here for full story
Posted by Sajid Iqbal at 00:21 No comments:

The fortnight celebrates the signing of Ulverston’s market charter by Edward I in 1280.

A fortnight of fun features archery, dance, road running and more.
This event is organised by Ulverston Town Council to mark the granting of the town’s Market Charter in 1280.

For details of more Festivals and events go to : http://www.lakedistricttouristguide.com/Articles/FESTIVALS-AND-EVENTS_44.asp
Posted by Sajid Iqbal at 00:51 No comments:

For places to stay during the event check out http://www.lakedistricttouristguide.com
Posted by Sajid Iqbal at 00:41 No comments:

Kirkby Lonsdale September fair on the weekend of the 5th & 6th of September 2009
Posted by Sajid Iqbal at 07:02 No comments:

For a chance to win 2 nights at a Lake District B&B with stunning views all you need to do is become a fan of our facebook page and follow us on Twitter.

All kicks off at 9am with the sheepdog trials.

To be held opposite Muncaster Castle, near Ravenglass.
Posted by Sajid Iqbal at 07:26 1 comment:

The Greenodd and District Horticultural Society is holding its 65th annual show on Saturday August 25.

It will take place in the village hall in Greenodd?s main street, starting at 2pm